Let's go back to our compiler window in xtherion, as below. 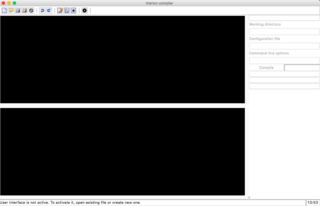 First, let's open a new file and save it as M19.thconfig.

Then, in the top window, we need to detail the source files we would like to compile, in our case, M19.th, and what kind of output we would like. For starters, let's display the centreline on a pdf. Type the following code:

and click on the clockworks icon in the middle of the screen to run the compilation.

First of all, the compilation should show a green box, indicating a successful render of the centreline. 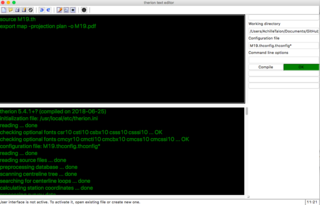 Navigate to the tutorial folder and notice that some additional files have appeared. therion.log, a transcript of the compilation run and M19_plan.pdf, our output file.

Let's open the pdf and notice how the the centreline and splays are displayed. There's a north arrow (here magnetic north, we will see later how this can be corrected), a scale and a few summary data about the cave like depth and length. 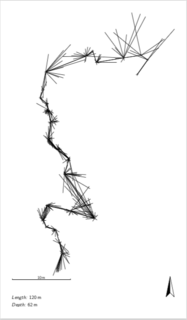 Let's delve into why the drawn walls, blocks etc... we clearly saw in the .th2 file did not appear yet on our survey.

Opening M19.th in a text editor of your choice, find the following lines:

The data recorded in the .th2 files is for the moment commented out. Let's remove the hashes here and look at the following lines:

These map objects are also commented out. We have a map called m1p which contains the M19-1p scrap object. Let's also uncomment these six lines and run the compilation again.

Below, we find that the PDF produced now contains a whole lot more information, namely, all the walls, points, pits, blocks etc... are nicely rendered. 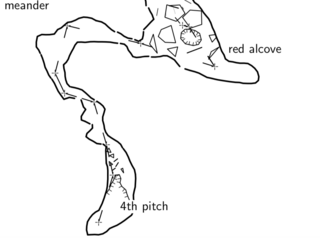 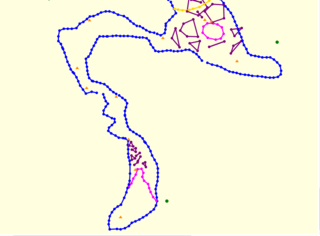