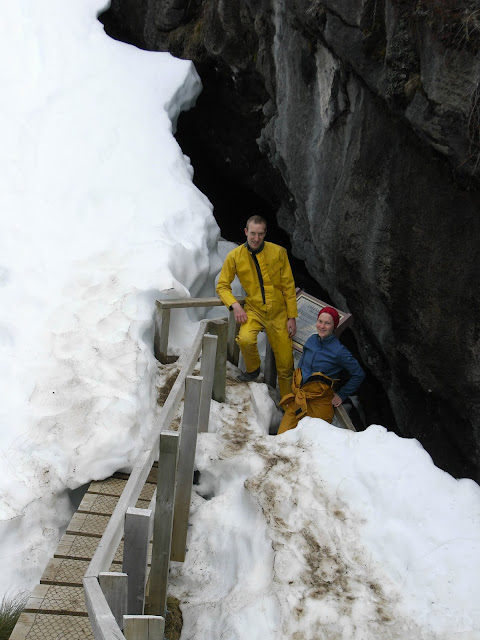 Nic is essentially the only caver in Dunedin and offered to take us caving to one of the nearest patches of limestone. After leaving Dunedin along with Toni and a novice caver Kyle early on Friday, we arrived at Te Anau at 6:30 pm. Our base for the weekend would be the Luxmore hut, on the side of Mt Luxmore on the Kepler track (in the Fiordland area of south-west New Zealand), signposted just a 6 hour walk and 900 m of ascent away! You know the drill, endless hairpins up through the woods, but this time more of a jungle. Eventually we popped out of the trees and the last half an hour was spent walking across the plateau using the just the moonlight. The view to the left is patchy snow on a gently sloping plateau; to the right are the fjords of Lake Te Anau, 900m below. It is not dissimilar to the Tolminka valley should global warming cause impossible sea levels rises. We also managed to knock two hours off the walk, arriving well before midday (GMT).

The caving can be described as similar to Yorkshire, small streamways of similar sideways-walking dimensions in dark, smooth rock (rather than the sharp white rock we’re used to in Slovenia). The bedding plane is about 10 degrees down and sideways, and all the caves in the area are confined to an area a couple of hundred metres square. The streamways we visited, Big Cave, White-Exit and Luxmore Cave run pretty much parallel to each other in the line of the bedding, at about 10m separation. There were some good formations in the caves though - bright white patches of flowstone with impressive stal and curtains. I can’t think where this would be similar to - perhaps the end of the Giant’s round trip above the Crabwalk? People have definitely explored these caves, just not much. There is evidence of people having been there before, but luckily little damage to the stal. I climbed up a grim wet inlet which looked like it had had just one person travel through it in the past, but we later found out in a report there was a grade I survey for a round trip. Just as you’d expect a 30 m pitch if you were in Yorkshire, the cave breaks down, with previous reports on the area described delightfully as “narrow and not promising, but may be pushed with effort” and “further progress only if keen”. Due to snow-filled shakeholes we couldn’t find all the caves previously reported (ca. 28 of them), but we tried to identify and GPS as many as we could. We didn’t find BPC Wet Grovel, but it sounds more enticing than BEC Wet Grovel. Then, because of a severe weather warning we scampered off the mountain Saturday evening. Shame really, cos I think the sunsets could rival Mig. A return trip is planned, not only to push the bottoms of the caves, but to find some more. Maybe we’ll book the helicopter next time to save us 8 hours of walking!